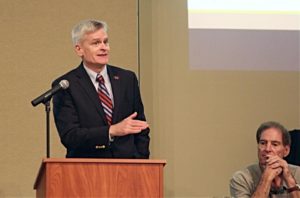 After the Republican party managed to maintain and build on its majority in the Senate Tuesday night, Louisiana’s senior senator said he is encouraged about his party’s prospects in Washington.

U.S. Sen. Bill Cassidy, R-La., spoke to a joint chamber luncheon Wednesday about where he plans to focus his conservative efforts moving forward.

Cassidy began his speech at the Cypress Columns in Gray by joking about the president and the polarization some say he has caused in American politics.

“President Trump may be the most polarizing figure in modern political history,” Cassidy said. “It is said that President Trump reminds every woman of her first husband, in that, is probably the degree of polarization.”

Despite the “craziness” in Washington politics, Cassidy said, the country has succeeded over the last two years.

“As long as we’re doing better, I will put up with the craziness in D.C.,” Cassidy said.

But there is a middle ground, Cassidy said, that lies in those who dislike President Trump but love his economy. He cited low unemployment and wage growth that have happened on Trump’s watch.

With the Senate still holding a Republican majority, Cassidy spoke about some of his key areas of concern for south Louisiana residents.

That includes continuing to push for reforms for the National Flood Insurance Program. Cassidy has been working on a bipartisan bill with Sen. Kristen Gillibrand, D-N.Y., to extend the program for 10 years.

The most recent extension was passed in July, but that is set to expire on Nov. 30.

Building upon his career background in the medical field, prescription drug costs are another concern, he said. Last month, Trump signed the Know the Lowest Price Act and the Patients’ Right to Know Drug Prices Act into law, eliminating “gag clauses” that prohibit pharmacists from telling patients when it would be cheaper to pay for their medication out of pocket.

A few years ago, a group of independent pharmacists from Louisiana visited Washington about the issue, stating their hands were tied to help patients avoid unnecessary costs.

“Without pharmacists from Louisiana, that may not have happened,” Cassidy said.

Other health care reforms on his agenda include promoting price transparency to give patients the power to make medical decisions based on their health, and pocketbook; increasing opioid treatment programs, including for Medicare recipients; and reducing health insurance premiums.

But while local budgets are still feeling the strain of an oil downturn, Cassidy said, the federal government has provided record levels of funding to the Army Corps of Engineers, which has benefited Terrebonne and Lafourche parishes.

Some recently approved projects include a $9.5 million dredging of the Houma Navigation Canal, a $2 million project in the Atchafalaya Basin and a feasibility study for dredging in Bayou Lafourche.

While those projects have seen success, there are many others in the area that need attention, he said, suggesting that officials form a sort of round table to work out the projects and where to get the money for them.

Preparing the state for federal projects also means having state and local leadership ready and willing to provide matching money, he said, citing the decades-long planning and design of Interstate 49 that is planned to run through the state.

“In this community, there is local leadership, which is taking President Trump and Congress’s goal to make the United States great for all Americans. You’re the ones making it great for many Americans,” Cassidy said.