It was a thought-provoking event when we held the Houma-Terrebonne Chamber of Commerce Past Chairs Social during Chamber Week on Oct. 16 in recognition of the chamber’s 100th anniversary.

The robust group of leaders was engaged in boisterous conversations, discussing the many achievements of the chamber over the years. Of course, no one was around 100 years ago when it all began, but several people remembered the buildings that housed the chamber over the years. Many remembered the time when the Houma Tourist Commission was part of the chamber. Some recalled past presidents and chairs who are no longer with us, along with their contributions.

The mid-’40s echoed chamber presidents such as Gibson Autin, Julius Dupont, Tom Holcombe, J.E. Chaisson, and L.P Caillouet as champions of the emergence of the Intracoastal Waterway through Houma, connecting with Bayou Terrebonne to expand the maritime industry in the parish.

During the ’50s, ’60s, and ’70s, the local economy was booming and many chamber presidents including Leo Ferber, Claude Duval, George Arceneaux, James Buquet, E.S. Gaidry and George Rome helped to expand local business and industry, including the Southland Mall, through chamber efforts.

In the early ’80s, a determined group of chamber president advocates including Ken Watkins and L.J. Folse helped revolutionize Terrebonne Parish’s governmental history and remained actively involved in this transformation through 1984 when the structure was altered. What was once a Police Jury/Houma City Council form of government morphed into a Home Rule Charter system with a parish president. This required the chamber to seriously publicize and promote the positive aspects of changing the system. The results are self-evident, and the chamber can take pride in this accomplishment.

The chamber group, including Presidents Robert Marmande and Mike Voisin, continued its concern and interest in the new Parish Council system in the early ’90s when they advocated the reduction of the size of the council. This became a major focus for the chamber and ultimately led to a parish-wide vote, which was successful in reducing the number of members of the council to its current size of nine.

In 1998, Chamber President Michael Flynn led the drive to reduce the size of the School Board from 15 to nine members, which remains in effect today. He led actions to promote national awareness of our disappearing coastline with an SOS (Save our Soil) campaign, where school children wrote letters of concern to U.S. senators and Congress members.

Under the leadership of chamber presidents such as Alexis Duval and Jerry Ledet, the group successfully fostered term limits for the School Board members. Morganza-to-the-Gulf became a focal point for hurricane and levee protection. Led by Alexis Duval and other chamber members, including a past Chamber President Danny Walker, the Morganza Action Coalition was formed and remains an active advocacy group for levee protection. These are milestones for the chamber, the school system, and the parish.

Speaking of milestones, A.C. Fondren joined the chamber as its executive vice president in 1972 and Kay Thibodeaux joined the staff in 1979. It is important to acknowledge that in 1977, Aline Hebert became the first female Houma-Terrebonne Chamber of Commerce board member. In 2001, Sharon Bergeron led the way as the first female president of the Houma-Terrebonne Chamber of Commerce following “9-11,” with five other women following over the years. It was a stormy time for some of these women as Alexis Duval served as president during the Katrina/Rita era and Lisa Schilling during the Gustav/Ike era.

While many members were working on the School Board issues, President Kenny Smith was leading a chamber group to visit Washington D.C., wearing life jackets and imploring the shrinking coastline in Terrebonne Parish to federal officials and our capital delegation. Today, the School Board size has been reduced, but our coastline remains in trouble! Coastal restoration and hurricane protection remain primary focuses of the chamber. The organization advocates these concerns with participation in efforts of the Terrebonne Levee and Conservation District.

Withstanding time is the Leadership Terrebonne program that was established in 1993 by many current and past chamber members. This program has educated more than 600 Terrebonne citizens on the intricacies of the parish while fostering personal development, many of whom have gone on to participate in Leadership Louisiana.

In 2008, the chamber presidents became the chamber chairs and the chamber director (EVP) became the president/CEO. Today, the term president has been removed and the current title of the administrative leader is the chief executive officer (CEO).

One hundred years have passed, and the chamber continues to maintain high standards of serving the business community of Terrebonne Parish by remaining involved in critical issues for the betterment of our people. The mission will always remain a primary focus: “Uniting community and building a stronger Terrebonne.” I am beyond proud to be a part of chamber history. 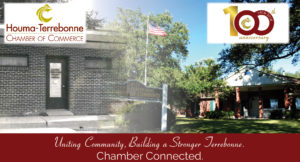